Georgia is the first state in the deep south to have a Comfort Women memorial statue, unveiled last month in Brookhaven’s Blackburn Park. Atlanta joins 54 other municipalities around the world that have comfort women memorials to commemorate the more than 200,000 victims of sex trafficking during WWII. There’s been opposition to the memorial — which was originally slated to be placed at the National Center for Civil and Human Rights — from a variety of sources, including state Rep. Tom Taylor.

Japanese imperial forces abducted more than 200,000 women, mostly Korean, during WWII and brought them to so-called “comfort stations,” to be repeatedly raped by soldiers. The comfort women endured horrific experiences of rape and abuse.

As the Marietta Daily Journal reports, 89 year old survivor Kang Il-chul was present at the unveiling of the memorial, called the Young Girl’s Statue for Peace, and spoke to the crowd through an interpreter.

“The Japanese rounded up many girls and took us to China. That was the time when Korea was under Japanese invasion and occupation,” Il-chul said via a translator. “After I was taken to China, I lived all my life in China because I was not able to come back to Korea. I didn’t have the means to come back to Korea after the war.”

“I wanted to talk to people about what happened to me in the world,” she added. “What happened to me is that I was one of the girls and people who were dragged by Japanese people like a dog or animal, not like a person, to China.” 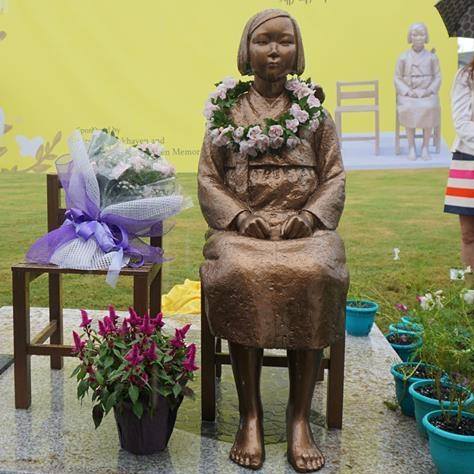 For Satyam Barakoti, erecting the memorial is about deeply listening to the horrific experiences that comfort women endured, and working to change the cultural forces that allow sex trafficking and other forms of violence to persist to this day. Barakoti is the Georgia Director of the National Asian Pacific American Women’s Forum (NAPAWF) and a member of the Atlanta Comfort Women Memorial Task Force, which advocated to bring the memorial statue to the Atlanta area.

“By putting this memorial down, we are saying to them ‘we hear, we hear, we see what you’ve been through, and we remember you,’” Barakoti told Better Georgia. “The things that are important for me is acknowledging the history, acknowledging the horrific experiences that these women went through.”

“NAPAWF is working on changing the culture of silence into a culture of knowledge and acceptance,” she added. “The issues we are working on today – comprehensive immigration reform, reproductive justice and economic justice have faces and stories just like the Comfort women behind them.”

Atlanta is one of the top cities in the nation for sex trafficking, a problem the state legislature has been struggling to combat for years.

Rep. Tom Taylor, whose district abuts Brookhaven, spoke out against the memorial being placed in Brookhaven.

“This is a political group that basically wants to drive a wedge between Japan and Korea,” he told Reporter Newspapers.

“I’m looking at this from an economic development standpoint,” he added. “When we compete for business, we compete with all states.”

Taylor got into trouble last year when he was arrested for a DUI, driving more than 25 mph over the speed limit, with three minors in his vehicle and a gun holstered to his hip.

“By establishing this memorial we raise the awareness of the ongoing problems of sexual and human trafficking taking place in the metro area and the world today,” Ernst said, according to the Saporta Report. “The city of Brookhaven is proud to join the growing list of progressive cities around the world that have installed this memorial to recognize comfort women and to talk about their suffering.”