A powerful Republican state Senator is blocking a crucial bill that would require police to account for the backlog of untested rape kits — evidence of sexual assault, sometimes including DNA, gathered when victims report the crime to authorities in Georgia.

Many rape kits sit on shelves and remain untested for years or are even lost, all while the alleged rapist is never held accountable for the crime and is free to rape again.

The Pursuing Justice for Rape Victims Act, sponsored by Rep. Scott Holcomb (D-Atlanta), would require law enforcement to find and count rape kits that have, in some cases, been ignored for years.

The bill has strong bipartisan support. Co-sponsored by Rep. Taylor Bennett (D-Brookhaven) and three prominent House Republicans, the legislation passed the state House of Representatives unanimously and has the support of law enforcement, hospitals and victims groups. Republican state Senator Charlie Bethel (R-Dalton) is sponsoring the legislation in the Senate.

But Sen. Renee Unterman (R-Buford) won’t let the proposal go forward. She’s the chair of the Senate Health and Human Services Committee, and she has refused to even schedule a hearing on the bill — a hearing that must occur in order for the bill to move forward. 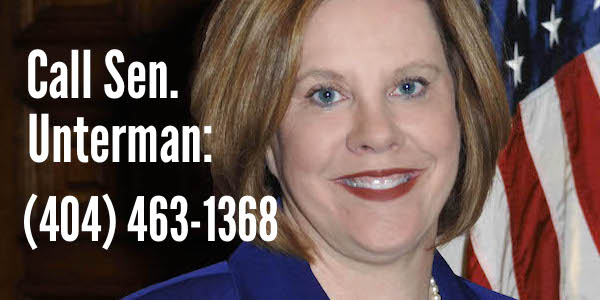 She says that she believes law enforcement agencies are cleaning up their act and claims that she doesn’t “see a reason to write a law.”

Let’s be clear: this bill would not just address the shocking issue of abandoned and untested rape kits; it would guide the process for rape kit collection and testing moving forward.

Law enforcement groups, including the GBI and the Prosecuting Attorneys Council, support this bill. This is a simple, common sense proposal with overwhelming bipartisan support that would solve a big problem and make sure it doesn’t happen again. There is no good reason not to support it.

Call Sen. Renee Unterman today at (404) 463-1368 and tell her to do the right thing for rape victims and let this bill move forward.